Canal holidays in Wiltshire are centred on the Kennet and Avon Canal. How better to see the county than meandering through the beautiful Wiltshire countryside.

The Wiltshire portion of the canal is around 45 miles in length and forms the major part of the 87 mile waterway linking London and the River Thames in the east with Bristol and the River Avon in the west. It is navigable along its entire route and enters the county of Wiltshire through the tiny village of Little Bedwyn in the east and leaves at Bradford on Avon in the west.

The initial construction of the canal began in 1723 and proceeded erratically and after many delays was finally completed in 1810. The canal then declined and fell into disrepair following the arrival of the railways. By the 1950s water had drained from sections of the canal, lock gates collapsed and the canal silted up.

The canal saviours came from The Kennet and Avon Trust which was set up more than 40 years ago specifically to restore the canal. Thanks to this organization and its army of volunteers the canal has become what it is today, a haven of peace and tranquility accessible by boat, cycle or on foot.

Where the canal enters Wiltshire at Little Bedwyn it runs parallel to London to Plymouth mainline railway which was ultimately responsible for the canal falling into disuse. A couple of miles further into the county it passes through the attractive village of Great Bedwyn with its small wharf and car park. The origins of the village stretch back to Saxon times when a battle between the kingdoms of Wessex and Mercia in 675 AD was believed to have taken place. This was associated with Crofton, a hamlet a little further west along the canal. It is here that the historic Crofton pumping station houses the oldest working steam driven beam engine in the world. Although the pumping station is open each day through the summer (closed for winter maintenance) the engines are worked regularly at publicized times throughout the summer season. Further on and a short walk from the canal is the Wilton windmill, again open to visitors and also well worth visiting.

West of Crofton the canal passes beneath the southern fringes of the Savernake Forest, just outside the ancient borough town of Marlborough, via the 459 metre long Bruce Tunnel. The route meanders west along the Vale of Pewsey where it passes through some of the most beautiful scenery in England. There is abundant wildlife with kingfisher and heron commonplace. The canal route takes you just to the north of Pewsey village centre.

A little further west of Pewsey one of Wiltshires famous White Horses carved into the chalk just above Alton Barnes can be seen a couple of miles to the north of the canal junction with Honey Street where the Barge Inn is located.

The canal now threads its way out of the Vale of Pewsey and into the historic town of Devizes. This town has its origins as a defensive stronghold bordering the disputed territories of the various tribes and medieval monarchs who throughout history seemed to spend much of their time plotting against or fighting each other. These battles culminated in 1643 during the English Civil War when the Roundheads (the Parliamentary Army commanded by Sir William Waller) were soundly defeated by the Royalists in an horrific and bloody battle at nearby Roundway Down. The place to find out more about the remarkable history of the county is at the Wiltshire Heritage Museum in Long Street, Devizes. It is one of the top museums in the UK and houses collections that match the finest in Europe.

As the topography and geology of the area precluded any easier and cheaper engineering solution (other means were later pioneered to reduce water losses such as lifts) the canal leaves Devizes in spectacular fashion by way of a staircase of 29 locks of which 16 were built close together to overcome the steepest gradient. In total there is a drop of 237ft (72m) over a distance of 2 miles (3.2km). This formed the final and most difficult feat in the canal construction linking the two ends of the canal in 1810. If you are on the canal you will of course need to allow a day to ascend or descend through all these locks but just think how fit you will be at end of it.

The canal continues its route west, skirting around the northern part of the town of Trowbridge to finally depart the county and join up with the Avon and ultimately the Severn Estuary at Bradford on Avon. This pretty old weaving town, population around 10,000, is set amongst beautiful countryside on the banks of the River Avon. Buildings from Saxon, Roman and Norman times have, the earliest of which is the Church of St Laurence circa 700 A.D., survived and the river itself is a major attraction with its ancient bridge forming the focal point. This bridge probably started off as little more than a wooden bridge but over the centuries has been renovated and rebuilt in a mixture of different architectural styles dating from Saxon times.

Canal holidays in Wiltshire afloat provide not only a most relaxing and rewarding holiday but are one of the greenest holidays you can think of. By comparison an average family of four on a canal holiday can consume up to 20 times less energy than an average holiday for four to a European destination. Slow travel in Wiltshire has many attractions especially when there are so many interesting places to stop off. The secret is not to rush anywhere and accept that there is little point in hurrying. A far more enjoyable way to travel than hanging around for hours in an airport lounge full of harassed adults and fractious children. 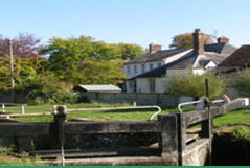 Perhaps you will choose to stay at one of the many canal side B&Bs or pubs. A good choice would be the White House bed and breakfast at Little Bedwyn which fronts the canal where you can be sure of a warm welcome from Annie and Christopher Nicholl. You can hire bicycles or just wander along the canal towpath and enjoy the view. Or maybe park up your caravan at the Barge Inn at Honeystreet near Pewsey and explore the canal and surrounding area. The canal is within easy reach of the many historic and interesting Wiltshire attractions and by its nature passes through or close to the many Wiltshire towns and villages scattered along its length.

If your Canal holidays in Wiltshire are to be afloat the Wiltshire based narrow-boat hire companies are concentrated mainly towards the western end of the Kennet and Avon Canal. The largest of these is Sally Boats at Bradford on Avon with a fleet of 16 narrow boats, Foxhangers with 12 and White Horse Boats at Devizes Wharf (tel. 01380 728504), another long established company, with a fleet of 3 boats and a wide beamed trip boat. A registered charitable trust The Bruce Trust, www.brucetrust.org.uk contact Danese Rudd 01672 515498, also provides purpose-built, wide-beam canal boats for hire by disabled, disadvantaged or elderly people and their carers. The Trust has a fleet of 4 hire boats, 3 based at Great Bedwyn and one at Lower Foxhangers, near Devizes.

Trip boats, both charter and public, are also available at other locations, such as Hilperton and Devizes. The Kennet and Avon Canal Trust operates the m.v. Barbara McLellan from Bradford on Avon for public and charter trips between mid-March until the end of October.