Amesbury is a small Wiltshire town 8 miles or 13km north of Salisbury and less than 2 miles or 3km from the World Heritage Site of Stonehenge.

Although the population of the town has recently expanded, at the last count it was around 9000. 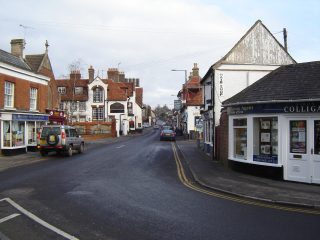 Of all the towns in Wiltshire and England the town has by far the largest concentration of ancient monuments, prehistoric sites and artefacts in and around the town. The most famous of all is of course Stonehenge; a World Heritage site that many insist should be included as one of the Seven Wonders of the World. This is but a small though undoubtedly impressive part of a landscape filled with ancient hill forts and burial mounds which can quite justifiably be called the cradle of Englands ancient civilisation. About 2 miles (3km) northeast of the Stonehenge site is Woodhenge which is even older than parts of Stonehenge. Though less well known but equally as fascinating this site is accessible to the public. It is signposted from the A345 north of the town and entry and parking is free. Surprisingly there was an even bigger henge monument at the ancient village of Durrington Walls just to the east of Woodhenge within walking distance and cut in two by the A 345. There is little evidence of it today. The henge measured 520 metres north to south and 450 metres west to east and this too was an important Neolithic site but much of it remains unexcavated. There is yet another Iron Age hillfort (around 500 BC) less than one mile west of the town centre known as Vespasians Camp which was surveyed in 1995.

Among the most stunning finds in very recent years is that of the grave of the Amesbury Archer. Using modern scientific investigation methods a large and exciting amount of information has been gleaned from this one individual. For example it is apparent that he was high born and his grave contains far more objects, including three copper knives and a pair of gold earrings, than any other burial of this date, about 2,300 BC. Other graves of Bronze Age origin have also been found recently at Boscombe Down airfield, overlooking the town, and are believed to be linked with the bringing of the sarsens (bluestones) from Wales during the construction of Stonehenge.

It is impossible to describe in such a short article the immensity and variation of the prehistory surrounding the town. The whole area would have been a focal point of an ancient civilisation. No doubt that as the town continues to expand more astonishing prehistoric revelations will emerge.

January 30 2007 -Archaeologists announced today the discovery of a Neolithic village at Durrington Walls, the largest of its kind in UK during recent excavations of the summer of 2006. These excavations have unearthed remains of many houses with imprints of beds and dresses on their clay floors. The village is within the huge henge monument mentioned earlier in this article and is buried about a metre and a half beneath the surface. Using the very latest scanning and mapping technology archaeologists believe this settlement of a population numbering hundreds perhaps thousands and was built during the time of the construction of Stonehenge to house the builders. The village was also a centre of feasting, celebration and merry making. Although very much conjecture it is possible that the dead from this ancient settlement may have been placed on boats and taken up the river Avon for burial at Stonehenge. Archaeologists are only now beginning to piece together the true extent of the complex activity that went on all around the Stonehenge area so many thousand years ago and this most recent discovery confirms that there is indeed very much more yet to be discovered.

More recent history at the time of the Domesday Book (1086), an inventory of all land, population and property following the conquest of England in 1066, shows the town as being owned by the King. There were 8 water mills along the River Avon and the population probably stood at around 700-900. It was very small and even though there was a nunnery, albeit a poor and impoverished one, there was little prosperity in the town at the time. A priory for both nuns and monks replaced it in the 12th century and both the town and the Abbey and the towns fortunes rose. A market was granted and by 1252 an annual three day fair and feast was held in the town. The medieval town grew up around the gates of the Priory. Inevitably there were various disputes between the Prioress and the Prior which resulted in the Priory being taken over by the nuns and reverting to Benedictine rule.

The prosperity of the town continued for several hundred years but was suddenly shattered by the King Henry VIIIs Dissolution of the Monasteries of 1540. This resulted in most of the Abbey buildings being demolished and a dramatic downturn in the fortunes of the town. The town survived and between 1595 and 1601 a new mansion was built on the site of the old Abbey. The mansion was rebuilt and extended over the years to become what it is today. It is privately owned and has been converted to a Nursing Home.

During the more recent times the coaching route from London to southwest England passed through the centre of the town and there were coaching inns and many other hostelries. The best clay tobacco pipes in England were manufactured in the town by Gauntlet. For much of the 20th century up until today the military has been the largest employer in the area. With establishments all over and around Salisbury Plain the town provides shops, amenities and services for nearby military bases and villages. In very recent years there has been some redevelopment of the town. The proximity of the main A303 has led to the construction of a business park alongside the route.

The town lies just to the south of the main route from London and the M3 and the southwest of England which makes it an excellent stopping off point for the traveller. Why not pause awhile and see where it all began. Not only is the history of this area remarkable but so too is the scenery. The peaceful and tranquil river Avon meanders past the town into a large loop taking it close and to the southwest of the town where there are beautiful riverside walks. North of the town the charming riverside thatched villages of Figheldean, Netheravon, Fittleton, Enford, and Upavon are easily accessible and a pleasure to visit. The beautiful river Avon continues on its way south from the town through Great Durnford, Middle Woodford and Lower Woodford with riverside pubs and restaurants set in idyllic surroundings, on through Little Durnford and past the ancient hillfort settlement of Old Sarum and into the very heart of medieval Salisbury 8miles (13km) to the south.

Less than 15 mins drive east of the town along the main A.303 is the Rare Breeds Farm at Cholderton an excellent family day out for the family. A little further but still less than an hours drive westwards on the same A.303 is the National Trust property of Stourhead, a beautiful Palladian mansion with its own lake, gardens and 2650 acre estate. 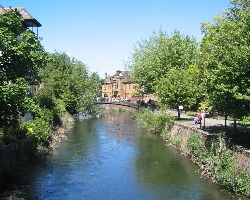