This unique creature is the heaviest flying bird in the world. A fully grown male can weigh over 20kg, which is twice the weight of a swan, and is also known for its spectacular mating display.

Until the end of the 18th century bustards were widely distributed in England particularly on the chalk downland of Salisbury Plain but numbers fell rapidly during the early 19th century as agriculture expanded, habitats were reduced until finally around 1840 this remarkable bird was hunted out of existence and became extinct. Now the species is under threat of global extinction.
Bustards are an important part of Wiltshires heritage, featuring on the county coat of arms and refererenced widely around the county in various clubs, societies and buildings.

One man in particular, David Waters, Director of The Great Bustard Group, is the driving force behind the recent re-introduction of this remarkable bird back into U.K.
The task has not been easy and included hand rearing the chicks by dressing up as a surrogate mother, transporting the chicks from the Steppes of Russia where they are currently considered stable, mountains of paperwork, quarantining the birds on entry to U.K. and minimizing the risk to the young birds from natural predators such as foxes.

There is an ongoing ten-year programme, begun in 2004, of Great Bustard annual releases into the Wiltshire countryside. Some of the most suitable habitats for the releases are over Salisbury Plain where the military training ranges have protected the environment but the arable fields of Wessex also offer an ideal habitat.

To date at least 20 of the birds released so far are alive which is about the percentage survival rate of the wild population of birds.
Previously released birds have been seen around the area of Salisbury Plain and have even been spotted in the bordering counties of Dorset and Somerset. The project has attracted widespread interest and support from farmers, landowners and businesses and membership enrolment of the group is available at their website. 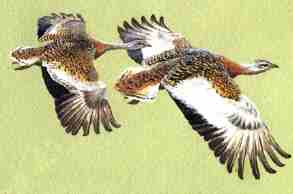 Perhaps in not so many years from now the Great Bustard will become a common sight in the skies over Wiltshire and ultimately England thanks to the enthusiasm and hard work of this dedicated team.
To find out more and help support this magnificent bird please visit their website: www.greatbustard.com