Old Wardour Castle ruin we see today surrounded by woodlands and a lake is a tranquil scene far removed from the stirring days of the English Civil War.

This was when Lady Blanche Arundel gallantly defended her home against a Roundhead attack. Her husband, Lord Arundel, had left the castle earlier at the head of a troop of horses to serve King Charles I, leaving her to care for their property with the help of the household and estate servants. He probably thought that their secluded home would be unmolested by the Parliamentary forces, but in May, 1642, Lord Hungerford brought troops to surround the castle and demand its surrender. 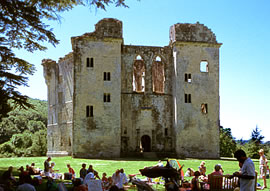 Lady Arundel refused to submit to his demands and prepared to defend her home with the aid of her faithful staff. Although the action was heroic it was impossible for the small band of untrained men to maintain the defence against overwhelming odds. After a week of heavy bombardment the gallant lady reluctantly surrendered on being promised honourable terms by Lord Hungerford. To add to her distress Lady Arundel received the news that her husband had died from wounds at Oxford on May 19th leaving their son, Henry to succeed to the title and the now forfeited estates.

Lord Hungerford left old Wardour Castle in the hands of Edmund Ludlow with instructions to hold it against any Royalist attempts to recapture the position.

The next month found Ludlow uneasily expecting enemy action at any time. The Royalist commander, Lord Hopton had advanced from the West Country into Wiltshire while the Parliamentarian, Sir William Waller, had suffered defeat at Roundway Down in July. Ludlow knew he was stationed in the midst of Royalist territory with the nearest Roundhead camp some twenty miles away.

While he waited he restocked the garrison and looked to it s defences in readiness for the anticipate siege. As summer turned to autumn he received an unexpected visit from his cousin. Robert Phelips, who supported the King but came to give his kinsman warning that the castle was about to be besieged. Phelips tried to persuade Ludlow to surrender his charge without bloodshed but the Roundhead insisted that must obey Lord Hungerfords command to hold it for Parliament.

It was in December that the long awaited attack commenced and it was young Lord Arundel who came to retake Wardour with the help of Sir Francis Doddington, a distant relative of Edmund Ludlow. During the following three months the Royalists sent envoys to the castle demanding its surrender but the defenders felt sure that help would come from their Roundhead colleagues and while supplies lasted they were determined to with-hold the siege.

Young Lord Arundel was equally determined to recapture his home. He planted mines in tunnels under the walls and the resulting explosion severely damaged the castle. Eventually, in March 1644, Ludlow surrendered as he knew that his stand was in vain. No re-enforcements had come to his aid and he was jeopardising the lives of his men beyond all reasonable limits. Again honourable terms were arranged and it must have given Lord Arundel quiet satisfaction to accept the surrender of the men, who less than a year before, had forced the surrender of the family home from his mother.

The gallant Lady Blanche Arundel died in Winchester on October 28th 1649, and her body was brought to the Church of St. John the Baptist in Tisbury for burial besides her husband.

The castle, although recaptured by their sons formidable bombardment, was left uninhabitable and gradually deteriorated into the picturesque ruin that we see today, while a new castle, more a luxury house, was erected in the eighteenth century to become the family home of their descendants which alas is not open to the public. However the old castle is open throughout the year to visitors and exploring the ruin will bring alive those violent days when Englishman fought Englishman in the English Civil War of 1642.

This tale, one of many from Cecilia Millsons Tales of Old Wiltshire , is reproduced courtesy of Countryside Books and is available from good Wiltshire bookshops priced £6.95.