Devizes is quite the most unique of the towns of Wiltshire as it did not exist until the Normans built a castle there around 1080.

It was probably built by Osmund the Bishop of Salisbury on the boundaries of the Kings manor of Rowde and those of the bishops manors and became known as castrum ad disas the castle of the boundaries. The original castle likely to be of wood which burnt down in 1113 and was rebuilt in stone by the Bishop of Salisbury of that time, Richard of Caen.

Between 1139 and 1141 this castle played a major part in the prolonged and bloody power struggle between Matilda (Empress Maud) and her cousin Stephen of Blois for the throne of England. Stephen, who had the support of many barons and bishops, invaded England and captured the castle, He then advanced west towards Matildas forces. The stronghold changed hands several times as the battle ebbed and flowed across the land. Treachery and deceit were a byword with frequent betrayals of alliances until Stephen was finally captured at Lincoln in 1141. Although she was never crowned by way of thanks to the townspeople Matilda granted them freedom from taxes which enabled them to hold their all-important markets.

The dispute over the crown continued with dramatic escapes by both the combatants until Stephen finally regained the throne and Matilda fled to Normandy in 1148. Stephen proved to be a weak indecisive king but managed to hold on to the throne until he died in 1154. These times are and were regarded as some of the bleakest of Englands history.

During the 12th and 13th centuries thanks to the market, the holding of fairs and the proximity of the castle, the town grew rapidly in size and importance.

The better known English Civil War of the 17th century also intimately affected the garrison town of Devizes. This was between the Cavaliers, the nobility and barons on the side of the King Charles I, and the Roundheads, mainly the disenchanted English middle class landowners on the side of Parliamentarians who resented the power of the monarch. This simmering resentment came to a head in 1641, some 10 years or more after Charles I had dissolved Parliament and taken absolute power. The castle became an important key stronghold in the bloody English Civil War that followed.

The initial siege on the Royalists holding the castle by the Parliamentarians in 1643 led to a Roundhead defeat at the battle of Roundway Hill. The castle remained under Royalist control until 1645 when Oliver Cromwells forces bombarded the castle from the towns market square. The Royalists finally surrendered. Along with many other strongholds in England the castle was finally destroyed on the orders of Parliament in 1648.

In the early part of the 18th century two windmills stood on the site of the old castle which were used for grinding rape seed and tobacco snuff. The windmills were demolished and the site is now occupied by a castellated mansion. This modern castle was built and extended during the 19th century but is not open to the public.

Although all that remains of the original castle are some foundations there are two fine 12th century churches, St Marys and St Johns from that same period. St Marys is the oldest church in towns and the very first market was held outside this church. St Johns was built a little later and served as the garrison church for the castle. 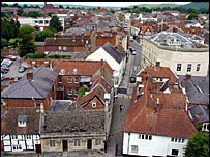 Today the town retains some of the most interesting and historic networks of medieval streets in England as well as its later fine Georgian buildings. It is well worth visiting to see marvel at this living history endowed with over 500 preserved and listed buildings There is a weekly outdoor and indoor market (held in the Shambles) on Thursdays.

Following these political and religious inspired wars of medieval England the textile industry flourished as did a later brewing and tobacco industry. The construction of the Kennet and Avon Canal in the early part of the 18th century linking Bristol and London boosted exports to London and the import of tobacco from the west through Bristol. Sadly this success was short lived with the arrival of the railway locomotive. The canal was taken over by the Great Western Railway Company and left to deteriorate into disuse. Despite earlier plans to include the town along the proposed Great Western Railway route from London to Bristol this idea was abandoned by Brunel because of the difficult terrain. The railway was laid further north and bypassed the town.

Thanks to many years of dedicated hard work and effort by the volunteers of the Kennet and Avon Canal Trust the link has been restored and the canal brought back into use. Today it is a valuable and appreciated leisure asset for the area which attracts visitors and residents to boat, cycle, fish and walk along this historic waterway. The spectacle of the worlds longest flight of canal locks, 29 canal locks dropping 237ft (72 metres) down Caen hill, the tranquility of the setting and the wild life that abounds along the canal in uncrowded Wiltshire is well worth the visit. 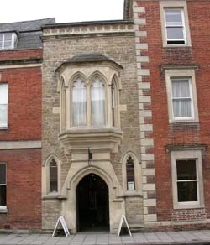 Wiltshire is a county endowed with layer upon layer of both ancient and modern history. The World Heritage sites of Avebury and Stonehenge, the ancient burial mounds, the White Horses carved into the chalk hillsides, medieval battles, prehistoric artifacts and natural history abound throughout the county. No better way to explore Wiltshire than to visit the Wiltshire Heritage Museum in Long Street and learn more about this fascinating and historic landscape. One of the top museums of the United Kingdom with collections that match the finest in Europe the museum is well worth a visit. Not only will you learn a great deal about this unique part of England but it will also help you to plan where to go and what to see during your stay in Wiltshire. The Museum is open 10am - 5pm, Monday to Saturday and noon - 4pm on Sundays.