Westbury is a small Wiltshire town with a population of just over 11000 which lies 12 miles or 19km southeast of the city of Bath.

The ancient parish of the town was one of the largest in Wiltshire and covered 10,000 acres with the town at its centre. 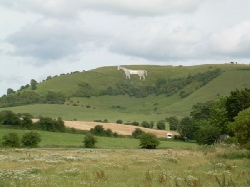 The north-western edge of Salisbury Plain forms a steep escarpment down to the town. This is natures canvas for the famous and prominent White Horse. Close by and above is the Iron Age hill fort Bratton Camp. To the south lies the high open wilderness of Salisbury Plain with its steep river valleys and hidden thatched villages. Unique to Wiltshire, The Plain has one of the richest habitats for wildlife and is the largest area of chalk grassland in NW Europe. There are several springs and streams at the foot of this escarpment notably Bitham and Wellhead providing a good water supply and this no doubt was the main reason for permanent settlement of the area.

Although there are some Stone Age finds around the town there is no real evidence of permanent occupation before Iron Age and Roman times (600 BC-440 AD) and even this evidence is rather sparse. The name of the town is thought to derive from West Burgh, burgh being a fortification.

Some Saxon remains have been found in the town and we can be sure that there was some sort of settlement there during those times (the 600 years before the Norman Conquest of 1066). Apart from well established ancient routes running across the area and the Iron Age hill fort at Bratton we have to rely on the Domesday Book of 1086 to find out more. The Domesday Book is a comprehensive inventory of all land, population and husbandry in England following the Norman Conquest by King William I in 1066. These early documentary references show the parish to have a population of around 600.

A borough was established with a weekly market and annual fair in the 13th century and a medieval town based on a rural industry developed. From about the middle of the 15th century the town sent two representatives to the English Parliament. This is a measure of its importance at that time and even today the Parliamentary Constituency is named after the town.

Westbury became an important centre for the manufacture of high quality cloth. As a cottage industry weavers brought their cloth to the clothiers workshops for the finishing processes. Fulling, cleaning and thickening were the first process to be industrialised and fulling mills were at Bitham in 1573 and Chalford in 1623. The town continued to prosper but the market for these high quality cloths declined sharply from the early 19th century as it faced fierce competition from cheaper cloths manufactured in the factories of the north of England of the Industrial Revolution. However, hand-loom weaving continued within the parish and even as late as 1840 there were still 140 registered hand-loom weavers in Dilton Marsh. Some mills survived by mechanising and specialising in superior quality cloth, glove making and leatherwork. Two mills in the town survived to continue producing right up until the middle of the 20th century. This legacy of the weaving industry is to be seen everywhere in the mill buildings that are now converted to private accommodation.

The steady decline in the towns fortunes was arrested by the arrival of the railway in 1848. The town is an important junction point on the railway network as it lies at the intersection of the London to Exeter line with the Salisbury to Bristol, Bath and South Wales line. High grade iron ore was discovered when the railway was under construction and a new industry based on the smelting of this local iron ore began. Trains brought in coal for the smelting process and exported the iron. A local iron works close to the railway station on the outskirts of the town continued operating up until 1933.
During the last century the traditional industries of woollen manufacture, glove making and iron ore production have been replaced by light engineering and the Blue Circle Cement Works. These days most resident wage earners work outside the town notably in service industries in Trowbridge or further afield.

Overlooking the town above the White Horse is Bratton hill fort. These ancient hill forts are scattered throughout Wiltshire and usually comprise concentric earth ditches and steep earth ramparts which can sometimes be very large in diameter. During ancient times these fortifications were usually used as places of refuge for a wide area of surrounding population in times of trouble. Occasionally hill forts were permanently occupied.

Bratton Camp is a fine example of a typical Iron Age hill fort and well worth visiting. Situated inside the hill fort there is an ancient long barrow burial mound which is believed to date back to around 3000 BC.

The sites of the White Horse and Bratton hill fort are both in the care of English Heritage and alongside Bratton hill fort there is an area for free public access. The views over the Wiltshire countryside are spectacular. In the right wind conditions the escarpment makes an ideal launch point for hang-gliders. There are many walks around the area with fishing ponds in Dilton Marsh and Brokerswood, both with caravan and camping facilities. The All Saints church in the town has the third loudest peal of bells in the world and has an unusual faceless clock made in 1604. The grand indoor Victorian swimming pool built in 1887 is quite unlike its modern equivalent.

Why not spend a day out at Brokerswood Country Park, an 80 acre area of woodland and the last remaining corner of Selwood forest which dates back to the Ice Age. It is ideal for family visits with the Woodland railway, Adventureland, Play Trails, Heritage Centre, a toddler undercover play area and other attractions. It has received the prestigious David Bellamy Gold Conservation award for the 5th year in a row.