The Avebury Henge Guided Tour is available by arrangement from the Henge Shop and the following description is a summary of what to expect.

The best time is in the late afternoon of an autumn day, when the lowering sun lights up the Sarsen stones and casts long shadows.

Start at the gate 10 yards (9m) west of the Henge Shop and go to the first stone. This strange jagged shape is the cemented amalgamation of several fragments found in the base of the blacksmith's forge which, along with many other houses, was demolished by Alexander Keiller in the 1930s. He intended to clear all the houses from the interior of the circle but this was halted by the onset of World War Two.

From this stone walk past the concrete markers which signify the position of previous stones which had been broken up and used in the buildings and walls of the village. Notice that, unlike the stones of Stonehenge, they remain unshaped and natural.

The indentations and pockmarks you see on the stones were made from insects and the roots of palm trees, which grew in the sandy topsoil during a previous tropical age. Sarsens are extremely hard, much more so than granite and they can still be found lying in the landscape around Avebury, especially in the valley of Piggledene.

Stop at the sixth stone from the main road - this is the famous Barber Stone. When Keiller excavated this and raised it up the crushed skeleton of a medieval barber/surgeon was found. A pair of scissors and a lance (valuable objects in that time) indicated his profession. A rotted leather pouch also contained coins limited to the 1320s.

We can surmise that he was helping to topple the stone into the pre-dug hole when he fell. He certainly would not have been buried deliberately with all that treasure. Perhaps the medieval church - which lies outside the circle - was regularly and ritually interring the stones of this pre-Christian temple. Out of sight, out of mind! Perhaps villagers had never let go completely of their pagan roots. Who knows?

Continue to the end and ascend the indented bank. The old stagecoach road to Bath and the west came over the downs and through the centre of Avebury; hence much chalk would have been dug from the bank to repair the potholes and ruts.

The ditch you see was nearly three times as deep when first constructed. We know this from excavations. But as only 4% of the 28 acres of the henge has been examined, a lot more is to be discovered. 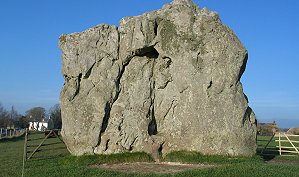 The Avebury Henge Guided Tour continues by crossing the road and walking towards the beech copse and to the enormous stone called the Devil's Chair - about 60 tons in weight. Legend has it that on the night of the full moon maidens who wished for children would walk round anticlockwise twelve times and then sit on the small stone shelf. Locals believe a smart young man was already ensconced!

Go up the chalk path to the left of the beech copse. See the Avenue to the south. Regard Windmill Hill to the north-west on the horizon - small bumps show the bronze age round barrows. On the horizon to the east, the beech copses indicate the course of the prehistoric Ridgeway - called by many the Oldest Road in Europe.

Go through what remains of the southern inner circle to the large concrete Obelisk and the other concrete markers, unromantically labelled by archaeology as the Z feature. The large Obelisk represents the tallest stone in the circle, about 22 feet high, which was recorded by Stukeley as fallen down and broken in three pieces. The stone was shaped like a giant phallus and was used as a Maypole in the middle ages. Now its stone is incorporated in the ancient nonconformist church behind, a church renowned for its record number of christenings!

Facing south and slightly to the right of the Obelisk, line up two concrete markers with an existing stone of the inner circle, plus the telegraph pole and see them pointing to the top of Silbury Hill. This is the perfect example of a Leyline.

Exit this sector by following the outer circle round to the beech trees on the bank - incredibly beautiful roots spreading into the chalk bank.

Cross the road and follow the path at the top of the bank. Not many stones are visible but remember this is a largely unexcavated sector. Go to the Cove. 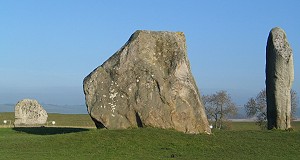 This centre of the northern inner circle faces the midsummer sunrise and is the start of the Beckhampton Avenue which proceeded down the High street to its eventual stop at Knoll Down.

Cross the road and take the paved path to the enormous diamond shaped Swindon Stone. A well restored section here takes you to the path to the Alexander Keiller Museum - a must if you are visiting Avebury.