Downton is a large village which lies 7 miles south of Salisbury on the River Avon and has a population around 3000 with the main A338 road west of it.

Owing to its favoured position in a fertile river valley it was probably one of the earliest tribal settlements in England. Castle Meadow is one of only a few Mesolithic settlements in Wiltshire and was also occupied in the late Neolithic and Bronze Age. The site has been more or less continuously settled since that time. During the Roman occupation a villa was built controlling a large farming estate and a nearby site at Witherington Down was also occupied. Prior to the Saxon invasion of England the Belgae tribe occupied the area and a notable battle at nearby Charford in 519 A.D. was won by the Saxon leader Cedric on his way to Winchester where he was crowned king of the West Saxons.

During Saxon times the village became the principal village of the area and was latterly the centre of the Bishop of Winchesters manor. Following the invasion of England by William the Conqueror in 1066 the Domesday Book of 1086 shows us that the village was the centre of a large estate with seven mills, a total population of 540 to 600 of which 450-500 were probably concentrated around the river valley.

The village underwent considerable growth during the 12th and 13th centuries and in 1138 it is believed that Bishop Blois built a castle here. The 18th century landscape Moot gardens is the most likely site of what might have been a motte and bailey of Norman design probably of wood as no stone remains.

Today the Moot Garden is owned by a charity, open to the public and mostly managed by volunteers. It has many interesting features and a delightful place to visit. Apart from special events it is open to the public without charge at all times.

The Bishop of Winchester continued to live on the estate until the late 14th century and the Saxon church was replaced by a Norman one which was enlarged during the 13th century. The bishop of the time tried to establish a market town on his manor just west of the original village around the church which today still retains the name of The Borough. Although it was used for market and fairs in 1249 it never really developed further. Like Wilton, ancient borough and one time capital of Wessex, it faced competition from the new nearby city of Sarum or Salisbury.

The river Avon that ran through the borough was very important as not only a source of waterpower for fulling and corn mills but also for its valuable eel fisheries.
There followed a period of decline through the 14th century which in common with many communities was probably a result of the plague known as the Black Death. During the next century the population recovered and the centre shifted east away from the Borough. 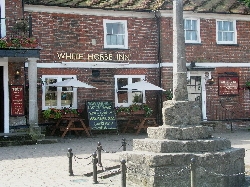 The first hostel or inn is thought to have been the White Horse in the Borough which played an important part in the community especially as Borough status meant sending two members to Parliament. Outside the inn there still stands the borough cross at which members of Parliament were returned to the hustings. The cross also marks the spot where markets were held when it was a market town. It was not until the Reform Act of 1832 when parliament representation ceased. 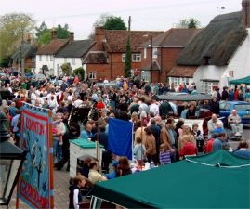 There have been various fairs and markets granted in the town and were first recorded in the middle of the 13th century. Two annual fairs which were subsequently revived in the 17th century and one, known as The Cuckoo Fair, held on the first Saturday of May each year with proceeds to charity continues today. In its present form the fair dates back to 1980 and is very popular for visitors and residents alike. It is estimated that upwards of 15,000 people attend the annual fair. The event features over 250 craft stalls and craft demonstrations, line dancing, street entertainment, a street parade, morris dancing, music, the Downton Brass Band with plenty for the children, including clowns, a bouncy castle and roundabouts.

Nearby is the historic Trafalgar Lodge. This has an interesting history and was originally known as Standlynch Park when it was built in 1733. Further wings were added in 1766. It was renamed Trafalgar when the estate was given to the brother of Admiral Horatio Nelson, Englands most famous and revered sea hero, who was killed in the sea battle of 1805 which it commemorates.

Successive Earl Nelsons lived at Trafalgar Park up until 1948 when the estate was sold. The house and parkland have been transferred to Trafalgar Park Trust with the long term intention of restoring the main house and wings and improving facilities not only as a future asset for the local community but as a venue for music and the sponsorship and development of aspiring young professional musicians. It is an ideal location for filming, offers corporate facilities, available for weddings and is used for a wide variety of functions. The house and grounds are privately owned and are not open to the general public.

The village makes an excellent base for exploring South Wiltshire and the Dorset coast. The medieval town of Salisbury with its spectacular cathedral spire is only 7 miles (11km) to the north. Wilton, ancient capital of Wessex lies just to the west of the city. The Earl of Pembrokes Wilton House is there and open to the public. Tisbury is a little further west with the interesting Wardour Castle ruin, also open to the public. An hours drive to the south will take you to the beautiful Dorset coast with its safe and sandy beaches, perfect for children. A little further on are the Jurassic Coast, Swanage and Studland Bay with miles of pristine golden sand and safe bathing. Many Dorset beaches hold the coveted Blue Flag Award.