Trowbridge with a population of just over 28,000 is the county town of Wiltshire and located on the western edge of Salisbury Plain. 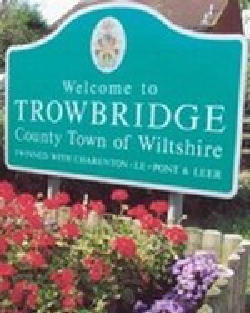 Although there is archaeological evidence dating from 3000-3500 years ago the town is believed to have been permanently settled from the 7th century. The origins for the name of the town come from Saxon for the tree-bridge river crossing and the boundaries of the settlement were believed to be in place by the 10th Century. From the Domesday Book, a written inventory of all land, property and livestock in 1086, following the Norman conquest of 1066, it was shown as a village with a population between 100 and 200 persons. Soon after this the village was handed over to Edward of Wiltshire, a most powerful landowner of the time, and transferred as part of his daughter Mauds dowry to Humphrey de Bohun who chose the village as the headquarters of his Wiltshire estates. Inevitably, a castle of the Norman style motte and bailey possibly of stone was built to defend the area. Very soon it came under unsuccessful siege from Stephen who was challenging the proposed accession of his cousin Empress Maud / Matilda to the throne of England following the death of her father Henry I . The castle fell into disrepair around 1300 and by the middle of the 16th century little was left.

The town grew up around the new church outside the castle from its village origins on the outside of the castle keep. In 1200 the town was granted the right to hold a weekly Tuesday market and annual fair. It had by now to all intents and purposes become a small market town. By the end of the 13th century the cloth industry was well established and it was transformed into a prosperous medieval town. The clothiers of the 15th and 16th century became very wealthy and the town was held in high regard. Although initially known for its white broadcloth production the town changed to a new type of cloth known as medley which was dyed, mixed and spun into yarn and the cloth finished to a very high standard. The reputation of both the town and nearby Bradford on Avon for the quality of their cloth was further enhanced by improved production methods.

During the latter half of the 17th century the town expanded further beyond its medieval boundaries. The towns population continued to grow on the back of the thriving cloth trade and was estimated to be around 3000 by the mid-18th century. However the town gained the reputation as a potential hotbed of rebellion given the poor working conditions, the introduction of factory machinery and the threat of revolution spreading from continent al Europe. River power was not really an option but once the new steam engines were introduced this provided the impetus to build new factories in the town. More people migrated into the area and the population rose to just below 10,000 in 1821 and with around 15 factories in production was regarded as an important industrial town of the time. The newly constructed Kennet and Avon Canal passed just to the north and this enabled the import of coal from the nearby Somerset coalfields to fuel the new steam engines. 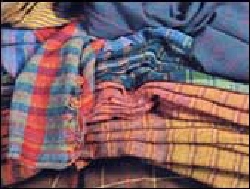 Along with other Wiltshire weaving towns the towns prosperity declined following the Industrial Revolution and the subsequent relocation of the woollen industry northwards to the West Riding of Yorkshire. The well established textile industry and the adoption of new industrial processes helped the town but nevertheless the industry went into a slow decline. Diversification into other industries during the 19th century such as bed manufacture, provision of central heating and catering equipment for public utilities and large stately homes, food processing and brewing helped to arrest this decline. The town had by now become the largest town in Wiltshire but was to be overtaken by the railway town of Swindon in the latter half of the century. The population started to stabilise but the boundaries continued to expand.

The population increased again during the 20th century as new industries were introduced and Wiltshire County Council built its headquarters there. The woollen industry continued its slow decline and the last factory in the town finally closed in 1982. Part of this building now houses the new museum which is located in the middle of the busy Shires shopping centre with ample parking and easy access. This museum relates the history of the cloth making industry and houses a range of machines used, the earliest being a wooden spinning jenny from the 1790s. Entry is free. 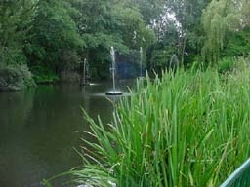 The town park known as The Peoples Park is in the heart of the town and holds many musical and community events, including the bi-annual West Wilts Show and the Carnival Country Fayre held in September. Adjoining the park is a special Sensory Garden. Also on the A361 leaving the town is the Southwick Country Park with over 100 acres of footpaths, sculpture, picnic areas, arboretum, woods and abundant wildlife. Just to the north of the town is the Kennet and Avon Canal with cycling, boating, walking and fishing.

Trowbridge makes an excellent base from which to explore the Wiltshire countryside and beyond. Nearby is the historic medieval town of Devizes. A mere two to three miles (4km) north west of the town is Bradford-on-Avon one of the most attractive and unique of the smaller weaving towns. A little further west in the county of Somerset is of course the ancient and renowned Roman spa city of Bath with its beautiful Georgian architecture and upmarket shops. Not to mention Corsham with its historic house, its collection of Flemish and Italian paintings and landscaped gardens. The picturesque villages of Lacock and Castle Combe are both within easy reach of the town. Over to the east is the Pewsey Vale, Marlborough, and the ancient Savernake Forest, with walks, cycle routes and horse trails throughout the tranquil Wiltshire countryside. Ancient and not so ancient history is everywhere. The World Heritage sites of Avebury in the north and Stonehenge in the south of the county, ancient burial mounds, numerous hill forts, Silbury Hill, the list is endless. Why not follow the river Avon past the delightful thatched villages that line its banks, perhaps stopping off at a riverside pub or restaurant and south into the heart medieval Salisbury City with its stunningly beautiful cathedral and famous spire.