Salisbury Wiltshire England city lies in the south of the county and has a population of 39000, being the largest centre in the county outside of Swindon.

The city is located in a valley at the confluence of the rivers Bourne, Avon and Nadder.

The medieval city has its roots in the nearby steep-sided Iron Age hill fort now known as Old Sarum about 2 miles (3km) north of the centre today. This location was the original site, a hill fort occupied by the Romans and named Sorviodunum then latterly modified and strengthened by Normans following the Norman Conquest of 1066. The exposed nature of the Old Sarum site and disagreements between the clergy and the military led to the building of the new Cathedral in 1220 A.D. to the south. The townspeople soon followed.

The ruined Norman castle and Bishop Rogers Palace in the central part Old Sarum is open to the public and an entrance fee charged. There is a free car park and the area between the outer and inner ramparts is a level grassed open area for the public. The views over the airfield, one of the oldest operational airfields in England, and to the north, west and south across the city are well worth seeing. Even if you do not look around inside the camp itself you are free to stroll around the outer steep earth ramparts. 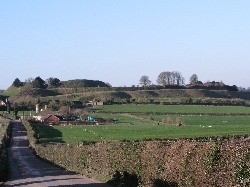 During the 13th century the new city was granted a charter of rights. One of the most important rights was the right to hold markets and fairs. A grid of five streets from west to east and six streets north to south was planned and the large church of St Edmunds was built on the northern boundary and dedicated in 1269. Another important design feature was the provision of running water through open water courses in the streets. This running water was drawn from and returned to the river Avon. Many of the todays street names of the citys medieval centre are history themselves and in many cases have a legend attached. Penny Farthing Street is said to be named after the daily wage that the Cathedral master masons living there went on strike for.

As the town prospered Wilton, the ancient capital of Wessex a few miles to the west declined as it lost trade to the new centre. The cathedral was started in 1220, consecrated in 1258, and completed in 1266. The cloister and chapterhouse and spire were added later. The spire at 404ft (123m) is the highest in the UK. The cathedral and its associated buildings became a centre of power and influence for the whole region and attracted considerable numbers of pilgrims. Woollen cloth manufacture was the main industry underpinning the economy of the city with a plentiful water supply to power the watermills that drove the wooden hammers of the fulling machines. A Franciscan Friary was also established in the town during the 13th century and by the 15th century the town had become a very important religious centre and one of the most prosperous in England.

Despite surviving famine and the plagues of 1563, 1604 and 1627 the city was affected by several major changes and events thereafter. The Dissolution of the Monasteries by King Henry VIII led to the closure of the friaries in 1538. Following the Reformation of the Church of England the city finally broke free of Church rule in 1612 when it was granted a charter confirming independent powers. The English Civil War of 1642 did not initially involve the city but it was later occupied by both Royalist and Parliamentarian armies in the winter of 1644. However, the city was fortunate and escaped the destruction inflicted by the English Civil War in other parts of the county. For several centuries the city had been dependent on woollen cloth production but during the 17th and 18th industry there was a steady decline. This resulted from not only the increased competition from imported cloth but latterly from the mass production factories of the Industrial Revolution in the North of England and the reluctance of the citys guilds to adapt.

Although the influence of the citys cathedral continued and was accompanied by its extensive restoration the town became less important during the 18th century. The Infirmary was built in 1774, street lighting appeared and the present day local newspaper was started in 1729. The open watercourses running through the city were replaced by a piped clean water supply and at the end of the 19th century a sewage system established.

Communications improved both to and from the city with a railway connection to London in 1847. By 1860 there were trains from London to the southwest of England and Exeter and also northwest to Warminster and Bristol. Following these marked improvement in road and railway infrastructure, trade grew, the population increased and the city prospered once more.

In the early part of the 20th Century another major employer, the military, took over large tracts of land to the north and military bases and airfields sprung up everywhere. Although the two world wars did not directly affect the city there were many ancillary manufacturers established around the area. The famous Supermarine Spitfire fighter aircraft of World War II was produced in the city as part of the plan to disperse aircraft production away from the Southampton works which was vulnerable to air attacks. The Spitfires were test flown from the High Post airfield just north of the city and adjacent to the present day Boscombe Down airfield. Boscombe Down airfield was and still is today a major employer. The airfield led the world in aviation development both during and after World War II.

Salisbury Wiltshire England is an excellent tourist destination with a wide range of both hotel and bed and breakfast accommodation to choose from both in and around the city. There is so much to see not only in the city itself but in the surrounding area and makes the perfect base for exploring not only Wiltshire and Wessex but also the south coast of England. Less than 90 minutes by road will take you to the south coast, the New Forest, Poole Harbour, Studland Bay and the Purbeck Hills or if you choose by frequent rail service into central London the capital city of England or south-west into Somerset and Devon. Or perhaps drive north through the picturesque Avon Valley into the heart of Wiltshire and visit Stonehenge and Avebury stone circles, the Kennet and Avon Canal, Marlborough, Savernake Forest and Devizes and other fascinating and historic places. On your way why not pay a visit to one of Wiltshires delightful riverside pubs and restaurants. The choices are endless.