Calne lies on the old London to Bath coaching route just east of Chippenham, forming a triangle with the similar size towns of Devizes and Melksham.

The town has an expanding population of around 14,000, is 93 miles (150km) west of London and lies on the edge of a designated Area of Outstanding Beauty. It is not very evident that there was any significant settlement in the area until the time of the Roman occupation and three Roman villas have been found in the surrounding area. In Saxon times the town formed part of a Royal Estate.

The Domesday Book of 1086, an inventory of lands, population, property and livestock drawn up following the Norman Conquest of England of 1066, showed the town divided between the King and the town church and this influenced its development thereafter. One side of the river was church property and the other that of the king. For those times there was a substantial population of around 1,000 living on the whole estate including an urban population of 500-600. Both the Kings manor and the church had rights to hold a market and fair and these were only finally abolished in 1877. The origins of the medieval town structure were centred on these market places but following a serious fire in 1340 which destroyed many of the earlier timber framed houses these were subsequently replaced by local limestone construction.

In common with many of the towns of Wiltshire there was a substantial weaving industry from the 12th century which continued through the 17th century and into the early part of the 18th century. Evidence of this period of prosperity was the building of the large and beautiful St Marys Church and wealthy clothiers houses around The Green. Water power played an important part in the founding and development of the industry but it declined more rapidly than that of the other Wiltshire towns as only limited industrialisation was introduced. By the middle of the 19th century all cloth-making had ceased in the town.

Bacon curing took over in the town to become the dominant industry for the area until the 1980s when the closure of the Harris factory resulted in a major recession in the area. Since that time there has been a regeneration of the town and it is now one of the fastest growing in Wiltshire.

In 1802 a spur of the Wilts and Berks canal was opened linking the town to the outside world via the Kennet and Avon Canal, the North Wilts canal and the River Thames south of Oxford. With the arrival of the railways and in common with all canals in England this link fell into disrepair and was abandoned. Today there are plans to reopen and restore these links for the future, bringing with them the prospect of a viable thriving leisure and wildlife facility to the area.

The rich history and heritage of the town and the surrounding villages of the area is housed in the interesting Heritage Centre in New Road, tel. 01249 820066. The centre displays and exhibits stretch from early Anglo-Saxon times right up to the modern day.

Nearby, Bowood estate, the ancestral home of the Marquess of Landsdowne, although originally forming part of Chippenham Forest, has long been an influence on the town and after 1890 became part of the towns Parish Without. The Lansdownes welcomed philosophers, writers and scientists to their home and Joseph Priestly in the 18th century, the librarian at Bowood, discovered the element oxygen whilst there. This controversial scientist and religious dissenter and his family lived in a house on The Green in the town from 1772 to 1779 where he conducted his experiments at nearby Doctors Pond on the River Marden. There is a commemorative plaque on the Somerfield footbridge. Other visitors included Benjamin Franklin, Jeremy Bentham and Dr. Samuel Johnson.The house and gardens today are open to the public from March until November and have many and varied attractions for all the family. In addition the estate boasts one of the countrys leading 18-hole championship golf courses complete with a Georgian style farmhouse converted into a stylish clubhouse.

Other attractions around Calne include the Blackland Lakes set amongst beautiful countryside and well away from busy main roads close to the Marlborough Downs. The 15 acres comprise 7 small tree lined paddocks and three small lakes, two for coarse fishing and one a nature reserve for wildfowl with a large camping site. 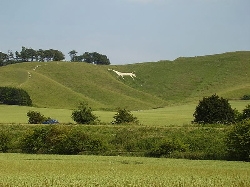 South of the town about 10miles (16km) is the historic medieval town of Devizes. The towns of Chippenham, Bradford-on-Avon, Corsham, Melksham and Trowbridge are all within easy reach. Further over to the west into the county of Somerset stands the ancient and renowned Roman spa city of Bath with its beautiful Georgian architecture and upmarket shops. To the west lies Corsham with its historic Corsham Court, collection of Flemish and Italian paintings and landscaped gardens. So too are the picturesque villages of Lacock and Castle Combe. Across to the east and southeast is Marlborough and the Pewsey Vale, with their famous white horses carved into the hill sides, the ancient Savernake Forest, the restored Kennet and Avon canal with walks, cycle routes and horse trails throughout the tranquil Wiltshire countryside. Ancient and not so ancient history is everywhere. The World Heritage sites of Avebury in the north and Stonehenge in the south of the county, ancient burial mounds, numerous hill forts, Silbury Hill, the list is endless. Drive south through delightful Wiltshire thatched villages perhaps stopping off at a riverside pub or restaurant then on into the heart of medieval Salisbury City with its stunningly beautiful cathedral and famous spire.