The Moonrakers legend can be interpreted two ways and it takes on several forms as to time and place.

One version is that a traveller came upon drunken Wiltshire yokels trying to rake a reflection of the full moon in a village pond convinced it was a cheese. This one conveys the notion that Wiltshire men were drunk and stupid.

However, another (true?) version says the legend shows these yokels to be very clever and that they originated back in the 17th century in Devizes. A group of smugglers were forced to hide their loot in a pond, the Crammer, when they were tipped off that the Revenue men were waiting in ambush. They returned on the night of a full moon to the Crammer with rakes. This again attracted the attention of the Revenue men. When asked what they were about they pretended that they were raking a cheese, the moons reflection, from the water. No doubt the Revenue men walked away shaking their heads at the stupidity of the simple Wiltshire folk leaving them to recover their contraband at their leisure.

This legend has become firmly embedded in the folklore of Wiltshire and the natives of Wiltshire were known. The name has spread throughout Wiltshire with pubs, clubs, hotels and even learned societies named after them.

I recollect hearing of a local after-hours Wiltshire drinking den being renamed the lofty title The Moonrakers Literary Society to get around the antiquated English licensing laws of that time. Thus members could quite legally be served liquor beyond the 2230hr deadline of those days. I believe that the local police were forever encountering drunks after a late night at the Literary Society. A modern take on an old legend shows us again how our simple Wiltshire man once again has the last laugh. 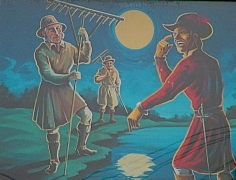