The charming and traditional village of Oaksey lies on the border of north Wiltshire and 5 miles or 9km miles northeast of Malmesbury town.

Today the population of the village is around 500. The name of the village originates from the Saxon name of Wochesie. It is mentioned in the Domesday Book of 1086. The Domesday Book is an inventory of all lands, property, buildings and livestock in England which was compiled following the Conquest of England in 1066 by William of Normandy.

There are remains of a Norman motte and bailey castle very close to Dean Farm known locally as Norwood Castle. Motte and bailey castles were medieval castles of Norman design and comprised a steep fortified conical earthwork often of wood but later stone, surrounded by a moat. They were usually defensive strong points built to protect baronial lands during feudal times of which Norwood is a good example. This site is on private land with no public access.

There are several footpaths and walks around the village and local woods. Two Wiltshire Wildlife Trust reserves, one at Clattinger Farm, the other a more recent acquisition at Lower Moors Farm with a newly built visitor centre and are just over a mile (2km) east of the village. A new wetland habitat for the endangered reed bunting is being created at the latter reserve.

The village All Saints church at the centre of the village has a particularly interesting history as its origins date from the mid-13th century. The 13th century work is in the nave arcade in the centre of the church, the walls of the south aisle, the south porch, the chancel and the lower stages of the tower. Towards the end of the 14th century the north wall of the nave was rebuilt, the north porch added and in the middle of the 15th century the roof of the nave was raised, the clerestory built and a further stage added to the tower
The original structure is on the whole well preserved, though some changes have been made, more especially the addition of the point chancel early 19th century arch. The remains of a spiral staircase are visible in the thickness of the wall by the lectern which would have provided access to a loft over the original chancel.

There is a medieval glass window from the 15th century beside the pulpit which depicts figures of saints, a child in a bathtub and a pelican feeding its young and this was restored in 1989 by Keith Barley of York. The extensive remains of the Mural paintings, previously hidden under lime wash, were uncovered from 1933 onwards. The oldest surviving mural is of 13th century origin on the surrounds of the west wall in the south aisle. On the south wall of the south aisle are three larger murals. The outer two date from the 15th century and were restored in 1988 by the well known conservator, the Perry-Lithgow Partnership. The church is open from Saturday 29th March 2007 to 29th September between 10am and 4pm and will give a warm welcome to any visitor.

The village retains its traditional Cotswolds charm and is both open and friendly to the visitor. Situated as it is on the edge of the Cotswolds and close to wildlife and water parks there is plenty to do and much to see. 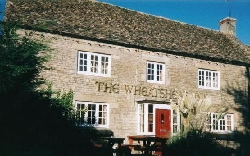 The Village Hall, The Wheatsheaf Inn, local primary school and the church are all in the village centre overlooking the cricket field. What better way of enjoying a summers day than to relax and watch a game of cricket.

If you fancy a spot of fishing there are over 40 acres of tranquil and peaceful water at the Lower Moor trout fishery. For the more active the Cotswold Water Park is a little further on which caters for just about every water sport you can imagine.

The Oaksey Park Golf and Leisure Estate welcome both golfers and non-golfers alike to its 9-hole golf course. The new clubhouse has stunning views across the links and serves excellent food and can also cater for your special events. Not to be outdone the village even boasts its own airfield at Park Farm with a clubhouse and hangars.