Malmesbury is arguably the oldest borough in England and the oldest continually inhabited town in England with a charter granted in 880AD by King Alfred.

The town has a population of 4600 and is located on the southern edge of the Cotswold hills and facing southwest across the river Avon. Very recent archaeological excavations found a wall dating back to 2500BC and also a section of a substantial Iron Age hill fort dated between 500 and 800 BC and further Saxon remains. As a defensive strong point it sits in an elevated position surrounded on three sides by rivers.

An early Saxon Abbey and monastery was founded 600-700 AD. A learned and skilful Saxon, Aldhelm (canonised as a saint by Rome after his death) took over the monastery and abbey around 700AD and was believed to have built the first organ in England there. Curiously, several centuries later, one of the 11th century monks Eilmer, made another first by attempting to fly from one of the towers. An astrologer and mathematician, he strapped wings to his hands and feet and was carried about 200m before crashing to the ground and breaking both legs. He survived but was convinced that all he needed was a rudder to allow him more control. Fortunately for him the Abbott forbade it. A stained glass window in the Abbey installed in 1920 commemorates Eilmers bold and pioneering enterprise.

The town grew around the Abbey and by the 9th Century became a local trading centre as well as a renowned seat of learning. This fortified settlement was sacked by the Viking Danes but the Abbey was spared. The town recovered and grew to be one of the most important towns in Wiltshire by the 11th century. King Athelstan, a great Saxon king of England and grandson of Alfred the Great had many connections with the town and became a great benefactor. A measure of its importance was that it headed the Wiltshire entry in the Domesday Book. This book is a famous and unique inventory of all the lands and properties acquired by King William I (the Conqueror) following his invasion of England from Normandy in France in 1066. 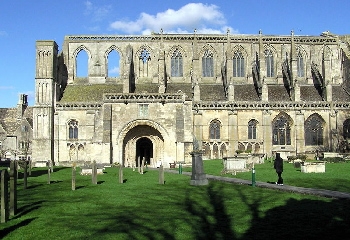 A castle was built close to the Abbey and played an important role during the Civil War between Empress Maud (Matilda) daughter of William I and Stephen her cousin for the throne of England . In an ongoing dispute King Stephen, took over the town but the Duke of Anjou (Matildas son who later became Henry II) laid siege to the castle in 1153 and captured it. As was common in those times the ongoing rivalry between the kings soldiers and the clergy resulted in the destruction of much of the castle in 1216 and the enlargement of the Abbey. A new town wall fortification was thought to have been built during the 1130s and much of the present street layout of today was established within these walls. There are some remains of the walls in and under the Bell Hotel. This hotel is certainly the oldest in Wiltshire and also believed to be the oldest in England. As far as known it has been in continuous use for 770 years

The history of the town is unusual in that it originally comprised three separate areas  the Benedictine Abbey, Malmesbury and Westport. Following the Dissolution of the Monasteries by Henry VIII in the middle of the 16th century the Abbey and its lands were absorbed into the town. Westport remained a separate settlement until finally it too was absorbed into the town in 1934. The prosperity of the area and its separate and diverse background gave rise to several fairs and markets granted at various times over the centuries. 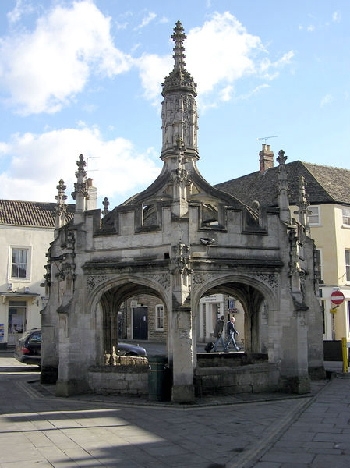 The Abbey dominated the town with continuous updating and modernising of the buildings. These included the addition of a central tower over the two western bays of the nave but this collapsed in 1660 and wrecked the western end of the church. Following the dissolution by King Henry VIII in 1539 the Abbey was bought by a local clothier to house weaving looms. This changed the character of the town and woollen cloth production became the major industry and a new mill outside the town acquired a steam engine in 1838. There was also a leather working and gloving industry.

The towns castle was once again to play an important role in the better known English Civil War of 1642-1651 being a strong defensive position on the road between Oxford and Bristol. As the war ebbed back and forth fortified castles all over Wiltshire were regularly fought over, taken and retaken. The war was a power struggle between the Cavaliers, the nobility and barons supporting King Charles I, and the Roundheads, mainly the disenchanted English middle class landowners on the side of Parliamentarians who resented the power of the monarch. This simmering resentment came to a head in 1641, some 10 years or more after Charles I had dissolved Parliament and taken absolute power. On the orders of Parliament in 1646 the towns walls were destroyed.

During the 18th Century the woollen industry declined. The town was bypassed by all the major road, canal and railway links of the 19th Century and became dependent on local commerce. Although lace making provided some work in manufacturing this ceased after 1914. New industries came to the town in the 20th century. More recently Dyson domestic appliances were manufactured there.

Situated as it is on the edge of the Cotswolds with many listed buildings, the Abbey, the Abbey Gardens and a fascinating history reaching back to ancient times makes this attractive town a popular and worthwhile place to visit or stay.